Our Story and History 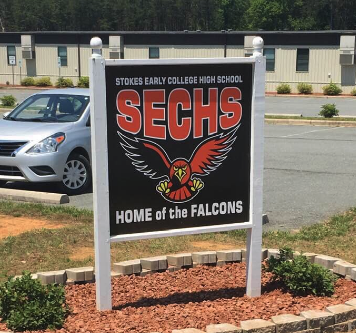 In the 2010-2011 school year, the SECHS moved to its current location on Dodgetown Road in the Meadows Community of Walnut Cove, NC.  This was the beginning of the Forsyth Technical Community College Stokes County Campus which started with one modular building that housed both Forsyth Tech and SECHS personnel.  Mrs. Ann Watts was the Director of Operations for the Forsyth Tech Stokes Center.  In 2011-2012, a second modular building was added.  On May 9, 2013, the SECHS held its first high school commencement as the first 29 Falcons to graduate from the high school.  Later that day, many of these same students graduated from Forsyth Tech with their Associate Degrees.  The 2016-2017 school year was one of growth for the Stokes Center Campus, as Forsyth Tech moved into a newly opened brick and mortar facility that began to house all of the college course offerings.  The SECHS and other Stokes County Schools departments such as the Data Center and Exceptional Children’s Division became sole occupants of the two original modular buildings.  In 2019-2020 the Forsyth Tech Trades Building was completed at the Stokes County Campus, but was unable to begin to offer courses until the 2020-2021 year due to the Coronavirus Pandemic closures.  Whereas, the primary focus of the Stokes Early College has been preparing students for graduation with an AA/AS and pushing them towards a four year college, there will now be an opportunity for and emphasis upon a career in the trades such as training as a electrician, plumbing, and welding.

Today, the SECHS houses between 160-180 students.  We are dedicated to providing rich, personalized opportunities for a diverse body of students, to be challenged academically and engaged creatively, in order to cultivate educational and occupational success and to maximize the potential of each and every learner. Students enter the Early College as ninth graders and graduate not only with a high school diploma, but also have the opportunity to receive a either an Associate of Arts degree, an Associate of Science degree, some college credits, or a career certification or diploma.  Typically, around eighty-five percent of the students who go on to pursue college ultimately finish.

Most of our students receive significant financial incentives from our North Carolina colleges as it is a wise investment for the colleges to support students who already have two years of academics “under their belts.”  As a school, it is committed to working together as a team with the community, parents, and students to create truly unique learning opportunities for its students and to provide with the support resources and resources to be successful in college and in life.  It does this through deliberate rigorous instruction that is intentionally connected to real world opportunities. Its goal is to promote the well-being of all students and inspire them to take flight and to meet the challenges of the 21st century on their own terms.

In the 2019-2020 school year, the Stokes County School Board approved for SECHS students to participate in extra-curricular activities at the three traditional high schools, beginning with the winter sport season. The extra-curricular plan allows students to participate in activities at their traditional home school such as interscholastic athletics, Reserve Officer Training Corps, Drama, and Band as schedules and opportunities allow.

At the Stokes Early High School your journey can begin and our future will be even brighter than our past.

Past Faculty at the Stokes Early College